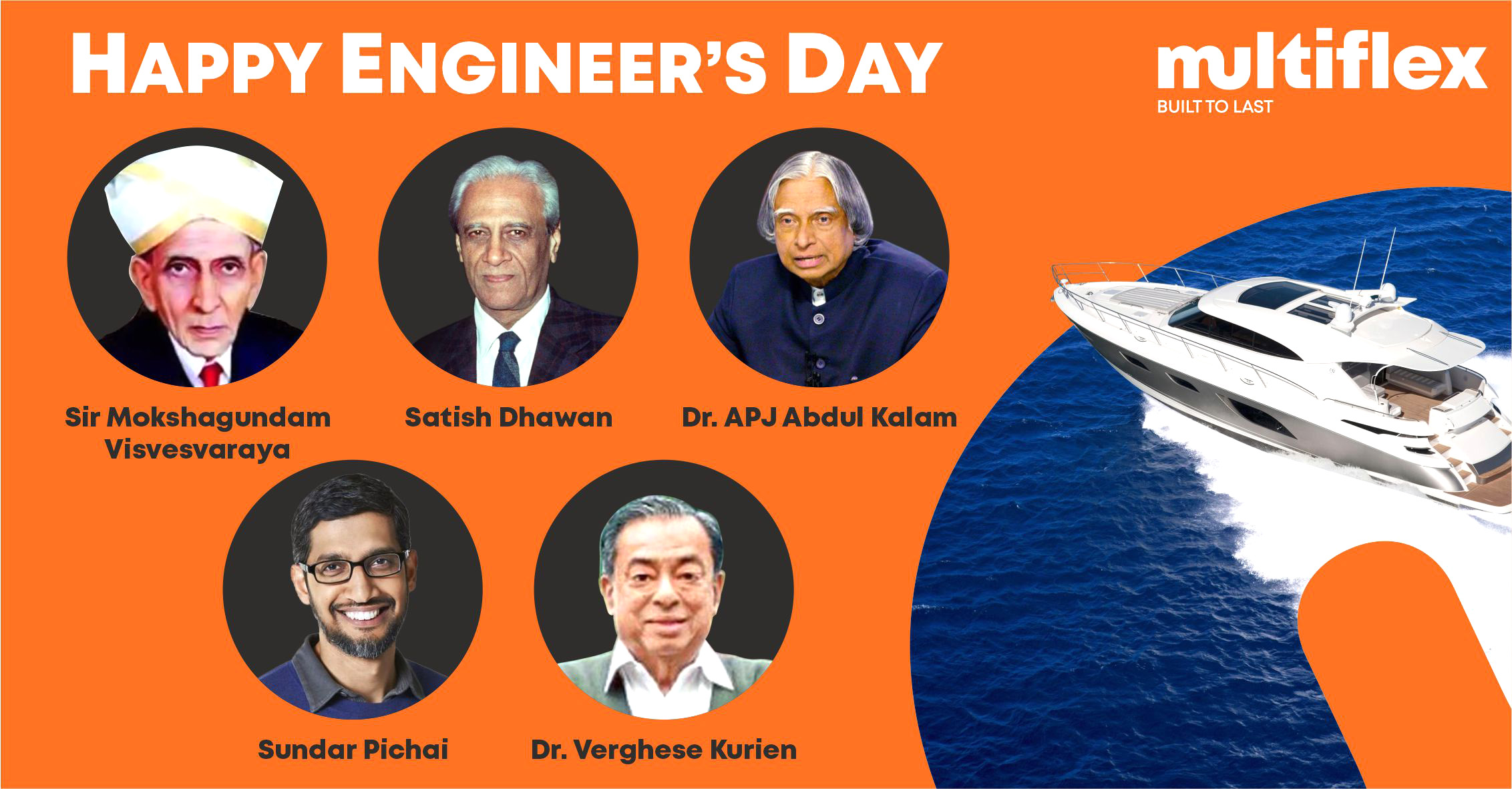 There may be various engineers, but in all engineers one thing is common that is they work to make our lives better by problem-solving, designing new gadgets, processes, and structures. This blog talks about top engineers in the world who were/are not only great engineers but great human beings as well.

India is fortunate to have the finest engineers in the world who were/are not only great engineers but great human beings as well. So, if you are trying to find out the names of these famous Indian engineers this is a perfect place for you. These engineers are among the most prominent in their field of technology.

The Engineering Community across India celebrates Engineers Day on 15 September every year as a tribute to the greatest Indian Engineer Bharat Ratna Mokshagundam Visvesvaraya. “Role of Engineers in a developing India” is the theme of Engineers Day 2017.

Mokshagundam Visvesvaraya was born on 15 September 1861, near Chikkaballapur in South Karnataka. He went on to become India’s most prolific civil engineer, dam builder, economist, statesman and can be counted among the last century’s foremost nation-builders.

Visvesvaraya was also the Diwan of Mysore from 1912 to 1918. He was the chief engineer responsible for the construction of the Krishna Raja Sagara Dam in Mysore as well as the chief designer of the flood protection system for the city of Hyderabad.

Known the world over for his contribution to harnessing water resources, Visvesvaraya was, among other things, responsible for the building and consolidation of dams across the country. He is also credited with inventing the Block System — automated doors that close in the conditions of overflow.

Due to his outstanding contribution to the society, Government of India conferred ‘Bharat Ratna’ on this legend in the year 1955.” He was also awarded the British knighthood by King George V, and hence has the honorific “sir”.

Prof. Satish Dhawan (25 September 1920–3 January 2002) was an Indian rocket scientist who was born in Srinagar, India, and educated in India and the United States. He is considered by the Indian scientific community to be the father of experimental fluid dynamics research in India and one of the most eminent researchers in the field of turbulence and boundary layers.

He was a popular professor at the Indian Institute of Science, (IISc) Bangalore. He is credited for setting up the first supersonic wind tunnel in India at IISc. He also pioneered research on the relaminarization of separated boundary layer flows, three-dimensional boundary layers, and trisomic flows.

Following his death in 2002, the Indian satellite launch center at Sriharikota, Andhra Pradesh was renamed as the Prof. Satish Dhawan Space Centre.

Avul Pakir Jainulabdeen Abdul Kalam, the former president of India, passed away on July 27, 2015. The nation remembers him every year and each time India accomplishes a feat in the area of science, especially space and missiles. While Dr. APJ Abdul Kalam served as the 11th President of India, he was an instrumental force behind the development of Agni and Prithvi missiles. Dr. Kalam also authored numerous books, including the famous Wings of Fire and Ignited Minds, which inspired children and adults alike to pursue their dreams.

His personal story, too, was nothing short of a superhero’s. Born on October 15, 1931, in a modest family in Rameswaram, Tamil Nadu, Dr. Kalam faced hardships during his childhood but never gave up. After finishing school at the Schwartz Higher Secondary School, Dr. Kalam went to St. Joseph’s College for his graduation in Physics. It’s said that he would study hours without a break and focused especially on mathematics. Following his graduation, Dr. Kalam acquired a degree in aeronautical engineering from the Madras Institute of Technology.

In 1958, Dr. Kalam joined the Defense Research and Development Organisation (DRDO) and over a decade later, in 1969, he moved to the Indian Space Research Organisation (ISRO). He was the project director for the SLV-III, the first satellite launch vehicle, designed and produced in India. Dr. Kalam returned to DRDO in 1982 and implemented the Integrated Guided Missile Development Program, which later earned him the famous nickname of the “Missile Man of India”.

His most significant contribution to India, however, was yet to come. Dr. Kalam also had the distinction of working with political parties across the ideological spectrum. For instance, he was appointed as the scientific advisor to the defense minister under the PV Narsimha Rao government. Dr. Kalam played a critical role in India’s 1998 nuclear weapon test under the leadership of then Prime Minister Atal Bihari Vajpayee. And while the international community expressed displeasure over the development and even imposed economic sanctions on India, the May 1998 Pokhran-II tests made Dr. Kalam a household name.

In 1999, when Mr. Vajpayee returned to power, Dr. Kalam served as the principal scientific adviser to the government until 2001. A year later, he succeeded KR Narayanan as the President of India. Dr. Kalam was honored with Padma Bhushan in 1990 and Bharat Ratna in 1997, the country’s highest civilian honor. On July 27, 2015, the “Missile Man of India” was delivering a lecture at the Indian Institute of Management, Shillong, when he collapsed and passed away due to a cardiac arrest. He, however, continues to live in the hearts of Indians.

As a boy growing up in Madras, Pichai slept with his brother in the living room of the cramped family home, but his father, an electrical engineer at the British multinational GEC, saw that the boys received a good education. At an early age, Pichai displayed an interest in technology and an extraordinary memory, especially for telephone numbers. After earning a degree in metallurgy (B.Tech., 1993) and a silver medal at the Indian Institute of Technology Kharagpur, he was awarded a scholarship to study at Stanford University (M.S. in engineering and materials science, 1995). He remained in the United States thereafter, working briefly for Applied Materials (a supplier of semiconductor materials) and then earning an M.B.A. (2002) from the Wharton School of the University of Pennsylvania.

Following a short stint at the management consulting firm McKinsey & Co., Pichai joined Google in 2004 as the head of product management and development. He initially worked on the Google Toolbar, which enabled those using the Microsoft Internet Explorer and Mozilla Firefox Web browsers to easily access the Google search engine. Over the next few years, he was directly involved in the development of Google’s own browser, Chrome, which was released to the public in 2008. That same year Pichai was named vice president of product development, and he began to take a more active public role. By 2012 he was a senior vice president, and two years later he was made product chief over both Google and the Android smartphone operating system.

In 2011 Pichai reportedly was aggressively pursued employment by microblogging service Twitter, and in 2014 he was touted as a possible CEO for Microsoft, but in both instances, he was granted large financial packages to remain with Google. He also was known to have helped negotiate Google’s $3.2 billion deal to acquire Nest Labs in 2014. Therefore, when Google cofounders Larry Page and Sergey Brin announced the creation of Alphabet Inc., in August 2015, it came as no surprise to industry insiders that Pichai was named CEO of Google, which was reorganized as a subsidiary. In December 2019 he also was named CEO of Alphabet, replacing Page, who stepped down

Verghese Kurien, (born November 26, 1921, Kozhikode, Kerala state, India—died September 9, 2012, Nadiad, Gujarat state), Indian engineer and entrepreneur who was regarded as the architect of India’s “white revolution,” which transformed the country from an importer of dairy products to the world’s largest milk producer through a system of farmer cooperatives.

Kurien was born into a wealthy Syrian Christian family. He attended Loyola College of the University of Madras (B.Sc., 1940), and he earned another bachelor’s degree, in mechanical engineering, from the same university in 1943. He also studied engineering at the Tata Iron and Steel Company in Jamshedpur, then in Bihar state, and he undertook training in dairy engineering at the National Dairy Research Institute of Bangalore (now Bengaluru). Kurien received a government scholarship to study at Michigan State University, where he received (1948) a master’s degree in mechanical engineering. When he returned to India, he was required, as a condition of the scholarship, to work at the Government Research Creamery in Anand, Gujarat state, which he began doing in 1949.

At the time, a small cooperative of dairy farmers, the Kaira District Co-operative Milk Producers’ Union, was working to overcome an entrenched system in which small local dairies sold milk to a large supplier for very little money, and the supplier transported the milk to Bombay (now Mumbai) and sold it at a substantial profit. The cooperative’s chairman, Sri Tribhuvandas Patel, asked Kurien to help strengthen the organization. Kurien became manager of the cooperative (which later came to be called Amul and became one of the largest food producers in India). Under his leadership, the organization acquired equipment to process and store dairy products and proved to be a reliable supplier. In the process, it improved the lives of rural dairy farmers. Other dairy cooperatives were formed on a similar model, and in 1965 Kurien became the first chairman of the new National Dairy Development Board. He instituted Operation Flood, also known as the “white revolution,” a long-range program with the objective of increasing milk production while both augmenting rural incomes and keeping prices within reach for consumers through the expansion of the cooperative movement. In addition, he established (1973) the Gujarat Co-operative Milk Marketing Federation. Gurien received numerous honors, chief among them the Ramon Magsaysay Award for community leadership (1963) and the World Food Prize (1989).